Can the principles of Sustainable Development reshape capitalism? 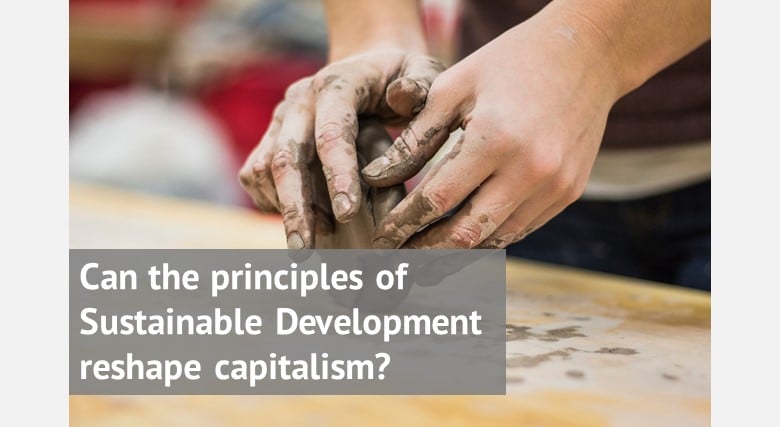 The world is faced with unprecedented challenges – climate change, financial instability, inequality- and its existence is challenged as never before. Yet, the current system of capitalism has significantly contributed to all these issues and its future is not secure, at least not in its current form. So, what is wrong with modern capitalism and will it be a victim of its own success? Can the principles of Sustainable Development reshape it and are the political elites ready to acknowledge that the economic model is not sustainable and needs to be remodelled?

Modern capitalism and its flaws

The roots of modern capitalism date back to the period of the early Renaissance, and its current model is the result of the process of globalization; by the beginning of the 19th century a group of loosely connected market systems had come together as a relatively integrated global system. After the Cold War, in the late 20th century, capitalism won the battle against the centrally planned economies and has become the dominant global economic system. Although there are many forms of capitalism that differ according to country and region, the common features among all these types is that they are based on the production of goods and services for profit and accumulation of capital as the implicit purpose of all or most of production, and predominantly market-based allocation of resources. Its success is attributed to the creation of the most productive economies ever witnessed in human history, at least in terms of material wealth. However, the realization that capitalism is not sustainable and that it has negative ecological and social impacts appeared in 1987, when the World Commission on Environment and Development (WCED) released the report Our Common Future, also known as the Brundtland Report. The current environmental and social issues stem from capitalism and industrialization and growth that is based on the depletion of limited natural resources. Being based on the quest for profit and deregulation of the markets, capitalism has been criticised as the system that has caused social inequality, unfair distribution of wealth and power, repression of employees, economic inequality, unemployment, and financial and economic instability. It is becoming obvious that the same economic system that has brought the world at the edge needs to be remodelled.

Sustainable Development as a tool for reshaping capitalism

As it is written in the Brundtland Report: “Sustainable development is development that meets the needs of the present without compromising the ability of future generations to meet their own needs.” The Sustainable Development Agenda 2030 aims to reshape the world by solving the current global issues resulting in social inclusion, economic growth, and environmental protection. By removing the wide gap between haves and have nots, creating more just society and protecting the environment will ultimately reshape the current economic model. Yet, the political will to boldly start remodelling the current economic system will certainly determine the success of the Sustainable Development Agenda. An early sign of the integration of the principles of Sustainable Development into a national policy is the “wellbeing budget”, recently introduced by the government of New Zealand. It shifts the attention from productivity and economic growth to wellbeing of community and protection of environment. GDP has been used so far as a measure of economic activity, measuring the market value of goods and services produced and assigning them monetary value, but it excludes measuring economic or social well-being. The government of New Zealand largely disregarded GDP and reoriented its attention to tackling the social and environmental issues. Applying the principles of Sustainable Development means incorporating in national policies and budgets the social and environmental aspects that have been ignored and ultimately this means that capitalism in its current form cannot survive. For instance, Finland, after choosing “two overarching themes for national SDG implementation (1. carbon-neutral and resource-wise Finland, 2. a non-discriminatory, equal and competent Finland)”, designed the strategy that is fully linked to the national budget since 2019 (pilot in 2018). Also, Slovakia’s six national priorities that cover the SDGs in a holistic way will be integrated into the National Investment Plan (NIP), which should bolster financing for sustainable development.

Will all the governments redirect their budget priorities?

New Zealand is the first country to demonstrate that government can incorporate social and environmental aspects into their budget. But, will other governments follow suit, and incorporate social purpose into national policy in a way that enhances quality of living, national pride and competitiveness? When will political elite acknowledge that the current economic model is not sustainable and cannot lead the world to sustainable future; and what more will it take to get there? This remains to be seen but time is ticking away, and the world cannot resolve current problems by following the same path that created them.

Photo by Alex Jones on Unsplash