Sustainable Development – Where has it all started? 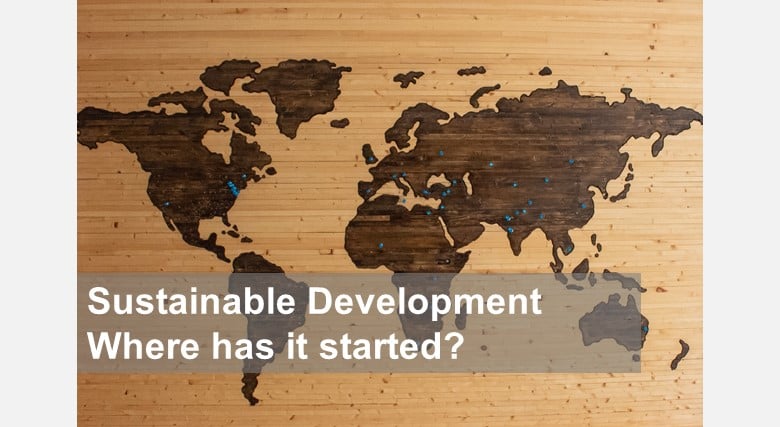 The legacy of the Brundtland Report

Nowadays, the world is on the mission to achieve the Sustainable Development Goals (SDGs) by 2030 that will put the humanity back on the right track of development and secure the future for the coming generations. But the idea of Sustainable Development is not a new one and it has been introduced more than three decades now. So, where has it all started?

The concept of sustainable development was placed on the international agenda with the release of the report Our Common Future by the World Commission on Environment and Development (WCED) in 1987 and it is also known as the Brundtland Report. It was in this report that the definition for sustainable development was coined for the first time: “development that meets the needs of, and aspiration of, the present generation, without compromising the ability of future generations to meet their own needs”. Back in 1970s, and the beginning of 1980s, developed countries started to become more aware about environmental and social issues stemming from industrialization and growth that was based on the depletion of limited natural resources. The WCED was asked to formulate “A global agenda for change” and this urgent request came from the General Assembly of the United Nations in 1983. The WCED at the time focused its attention on the areas of population and human resources, food security, the loss of species and genetic resources, energy, industry, and the urban challenge, realizing that all these issues are deeply intertwined and cannot be tackled separately. According to the WCED, ‘sustainable development is a process of change in which the exploitation of resources, the direction of investments, the orientation of technological development; and institutional change are all in harmony and enhance both current and future potential to meet human needs and aspirations.” The report emphasised the need for accepting sustainable development as a “global objective” and it called for “a new era of international cooperation based on the premise that every human being – those here and those who are to come – has the right to life, and to a decent life.”

Moreover, in the report, the WCED recommended the necessary steps that should be taken to ensure a sustainable present and future and these are relevant today as well:

The UN Sustainable Development Agenda 2030 and its goals bear much resemblance with the objectives of the 1978 WCED report. It seems that the world has disregarded the report from 1987 as not an urgent call for action and found itself facing the same issues only three decades later. The blame for this neglect should not be placed on any specific nation, let alone a person but apparently what was missed during the period of 30 years and is still missed today is the political will to seriously and responsibly address our common future. There is only one way out and that is the cooperation of all nations on building a sustainable common future for the present generations and the ones that will come.

What the future holds

Fast forward to 2019. The 1978 WCED report gave to the world the most coined definition in the field of Sustainability. The recent UN Sustainable Development Agenda 2030 and its goals bear much resemblance with the objectives of the 1978 WCED report, evidencing a sad realisation: the urgent call of action of WCED was taken lightly. The lack of an increased political will to

Three years after the adoption of the 17 SDGs, we see a positive update on a global scale. The movement to use the SDGs to tackle all key issues facing humanity with tangible results is growing stronger. We see a global, regional, national unease to turn into a force for change that leaves no one untouched. Private and 3rd sector, entrepreneurs, organised social movements push Governments to take responsibility and leave nothing to chance. It is only through global cooperation that we can secure a sustainable common future for the present generations and the ones that will come.

Photo by Brett Zeck on Unsplash