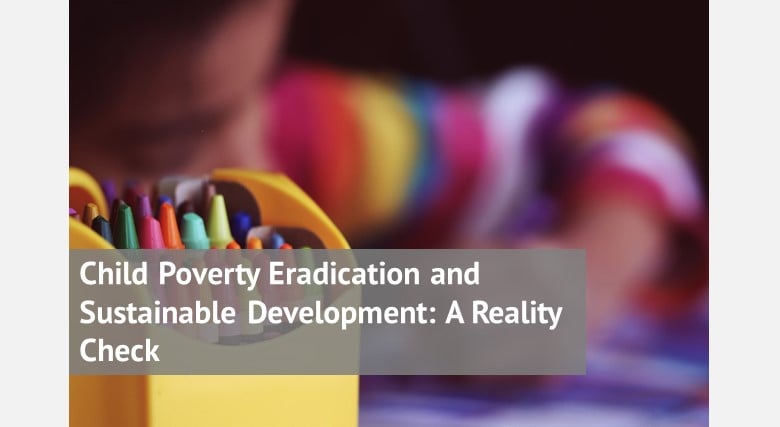 The scene of a young brother and sister, carrying a wagon through town and gathering wood planks and logs for their home stove in “Somewhere in Dreamland” cartoon that was released in 1936, depicts child poverty during the Great Depression. Impoverished children, who wear ragged clothes and dream of a safe home and a land full of candy, can still be found in some developed countries let alone developing ones, eight decades after this cartoon was released. Today, more than 1.3 billion people live in multidimensional poverty* globally, and 83% of all multidimensionally poor live in Sub-Saharan Africa and South Asia. The tragic and devastating fact is that half of these people are children. Moreover, children are twice as likely as adults to live in extreme poor households and only one-third of children are covered by social protection.

On 20th November 1989, the United Nations General Assembly adopted the Convention on the Rights of the Child, a landmark achievement that has since become the world’s most widely ratified human rights treaty. The Convention sets strict standards for signatory governments to protect the rights of every child. In the three decades following the adoption of the Convention on the Rights of the Child, it could be said that the world made some undeniable and sweeping achievements in many aspects of children’s rights. Some of these achievements such as the reduction of the number of children missing out on primary school by almost 40%, the fall of the global U5MR (the under-five mortality rate) by about 60% over the past three decades, with every region recording a reduction of more than 40%, the disappearance of gender disparity in access to primary education in most countries, with some exceptions in Africa, the Middle East and South Asia, the decline in the global prevalence of girls who are married before age 18 and those who undergo female genital mutilation, and the rise in the number of countries (58) that have prohibited corporal punishment in all settings, prove that the Convention has made numerous successes and brought tangible results.

Yet, even though its relevance and purpose remain undimmed, its realization – translating rights into results for children – has been mixed and uneven. Moreover, there is emerging evidence that some of the gains made for children in the past three decades could be lost. According to UNICEF Executive Director Henrietta H. Fore, “poverty, inequality, discrimination and distance continue to deny millions of children their rights every year, as 15,000 children under 5 still die every day, mostly from treatable diseases and other preventable causes.”

The aim to eradicate child poverty has also been included in the Sustainable Development Goals (SDGs) and the international community has agreed and committed to end extreme child poverty and halve the number of children living in multidimensional poverty by 2030. In this respect, national governments are encouraged to submit the Voluntary National Reviews (VNRs). When it comes to child poverty, in the last two years, 89 countries have issued VNRs. However, just over a third of countries have explicitly discussed child poverty in their VNRs. Moreover, even though 1 out of 7 children in the high income countries are living in poverty, explicit mention of child poverty is a rarity in VNRs from high income countries.

Children will also be the most vulnerable group that are and will be affected by climate change, especially those in the region of East Asia and the Pacific. Namely, current and future generations of children face declining water security, rising pressures on food production and increasing disasters and disease risks, with long-term consequences on their development. Moreover, climate change impacts are also projected to increase the numbers of children affected by natural hazards, from an estimated 66.5 million per year in the late 1990s to as many as 175 million per year (globally) in the coming decade.

Tackling child poverty in the EU

The EU Member States belong to the group of developed countries and still 25 million children in the EU face poverty today. No country, including the richest nations in the EU, can claim to be free from child poverty. EU’s policy response to this issue has come in the form of “Recommendation on Investing in children: breaking the cycle of disadvantage”, adopted in 2013, that called on EU countries to undertake measures at national level to tackle the issue of child poverty and social exclusion. In 2017, the Commission presented the European Pillar of Social Rights and Principle 11 of the European Pillar of Social Rights says that children have the right to:

Thus, even though social policy and welfare initiatives at Member State level are still the most significant policy instruments to tackle child poverty, the Member States are encouraged to maximise the use of available funding for child-centred initiatives. However, in 2015 the European Parliament noted that “the majority of Member States so far have given little attention to using EU structural funds to fight the alarming and still growing rates of poverty among children in the EU and promote their social inclusion and general well-being”, and recommended greater emphasis on the use of the European Structural and Investment Funds (ESIF) to support implementation of the Recommendation. For instance, some of the shared management funding mechanisms that are relevant for efforts to reduce child poverty and disadvantage and are available to the MSs include:

Τhe European Commission also manages a number of direct funding streams for which priorities are set centrally and funding is managed by the Commission:

Eradication of child poverty – how long to wait?

Detrimental effects of poverty on children accumulate across the life cycle and they lead to inequalities in health, cognitive development, psychosocial development and educational attainment. These inequalities are evident from preschool children through children during the school years, from entry into the labour market to resources for retirement, from mortality rates in later life, and these inequalities are often passed to the next generation.

Investing in simple family-friendly policies can reap multiple benefits for society in the long-term and are significant for improved equitable social and economic growth. However, family-friendly policies, such as paid parental leave, breastfeeding breaks, quality childcare and child benefits, are not a reality even in the richest countries in the world let alone low- and middle-income countries. Eradicating child poverty requires taking targeted and planned actions and investing available resources based on long term action plans. Funding and policies need to make a tangible positive difference to the lives of disadvantaged children and families at local, national, regional and international levels. How can we shape a prosperous and sustainable future If we allow so many children being left behind in the vicious circle of poverty?

*A broader definition of poverty that goes beyond income (of less than $1.90 a day)

Photo by Aaron Burden on Unsplash