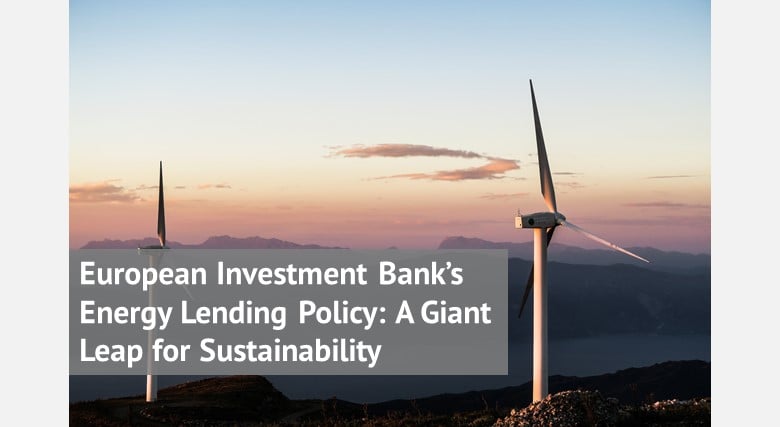 Last week, one of the headlines that captured the attention of all of those involved in driving Sustainable Development and Sustainability forward was the announcement coming from the European Investment Bank (EIB) on a new energy lending policy and new climate strategy. Namely, EIB confirmed its increased ambition in climate action and environmental Sustainability by announcing that it will stop funding oil, gas and coal projects at the end of 2021, cutting €2bn (£1.7bn) of yearly investments and it will align all financing activities with the goals of the Paris Agreement from the end of 2020.

The five principles of the EIB’s new energy lending policy

Future EIB engagement in the energy sector will be governed by five principles of the new energy lending policy:

The adoption of this new lending policy has been achieved after an open and inclusive review process which involved industry, institutions, civil society, and the public at large. From now on, EIB will no longer consider new financing for unabated, fossil fuel energy projects, including gas. Nevertheless, gas projects will still be possible, but would need to incorporate new technologies and energy infrastructures. In addition, the Bank set a new Emissions Performance Standard of 250g of CO2 per Kilowatt/hour (kWh) that will replace the current 550g CO2/kWh standard.

The Bank’s decision to phase out lending to fossil fuels energy projects is a significant change. Its new lending policy is structured around four themes:

Fighting climate change and ensuring environmental Sustainability cannot be achieved if some countries will be left behind in this transition to clean and Sustainable energy. Ten EU countries face specific energy investment challenges and the EIB will work closely with the European Commission to support investment by a Just Transition Fund. The EIB will be able to finance up to 75% of the eligible project cost for new energy investment in these countries and these projects will also benefit from both advisory and financial support from the EIB.

A quantum leap in climate action and environmental Sustainability

Even though the EIB is a leader in renewable energy with €28 billion invested in renewable energy projects between 2013 and 2018, this decision to move even forward is a new global benchmark. As Andrew McDowell, EIB Vice-President in charge of energy said: “The EIB’s ambitious energy lending policy adopted today is a crucial milestone in the fight against global warming. I am grateful for all those who have contributed to the largest ever public consultation on EIB lending in recent months and energy expert colleagues who have outlined how the EU bank can drive global efforts to decarbonise energy.” EU has just proved that it is the leader in the fight against climate change and it seeks to bring the real change the world needs today.

Photo by Jason Blackeye on Unsplash

Share
Tweet
Share
← Sustainability and the SDGs to become part of the Primary and Secondary School Curriculum: A Next Step? Child Poverty Eradication and Sustainable Development: A Reality Check →
Book an appointment