Achieved SDGs progress can be reversed if there is no change in direction, new UN report reveals 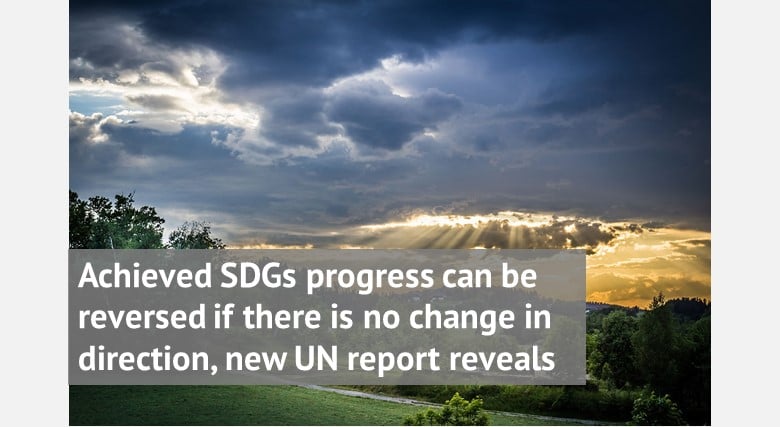 The latest UN report “The Future is Now: Science for Achieving Sustainable Development” that was published in September 2019, is the first Global Sustainable Development Report prepared by the Independent Group of Scientists appointed by the United Nations Secretary-General. It has been prepared by a team of 15 UN-appointed experts who “addressed sustainable development as both a scientific and a normative concept, using it as a guide to analyse the problem and weigh the evidence, and, where needed, recommend policy-relevant solutions”. So, what does the report say about the progress on the SDGs?

The biggest challenges and threats

Since the adoption of the Sustainable Development Agenda, there have been many improvements with countries incorporating the SDGs in their national plans, strategies and budgets, the private sector moving from business-as usual models and the numerous initiatives aimed at safeguarding the environment, notably regarding climate change, land use and oceans. However, the world is not on track for achieving most of the 169 targets that comprise the SDGs and the recent negative trends along several dimensions with cross-cutting impacts across the entire 2030 Agenda have started moving in the opposite directions threating the realization of the whole Agenda and the progress that has been made. The scientists’ analysis points out to four critical categories: rising inequalities, climate change, biodiversity loss and increasing amounts of waste from human activity.

According to the report, the entire 2030 agenda is threatened by rising inequalities in income and wealth. Namely, since 1980 income inequality has risen sharply and the poorest 50% of the world population received only a 12% share of the global gains, while the richest 1% of the world population received 27%. Yet, in 2017, this rose to 33% of the global gains, while the bottom 75% had stagnated around only 10% and the middle class recorded sluggish income growth. This rising inequality jeopardizes the progress on SDGs on many levels and it can have tremendous negative impacts when those on the top divert the resources from accelerating the needed transformations to maintaining their positions and status quo.

When it comes to climate change, the report warns that given the current policies and pledges, human-caused global warming is estimated to exceed 3 degrees Celsius by the end of this century. The concern regarding waste generation refers to the negative trends of growing amount of waste production that show no signs of slowing down. Plastic waste as well as solid waste in form of electronic waste, or e-waste, are growing faster and can threaten the progress towards sustainable development when collective processing capacities are overwhelmed. Moreover, the loss of biodiversity can further complicate the current situation and the rate of loss of species and genetic resources experienced over the past decades may lead to a sixth mass extinction if immediate action is not taken.

Under these negative current trends, the world’s social and natural biophysical systems cannot support the aspirations for universal human well-being embedded in the Sustainable Development Goals.

Not incremental changes but transformation

The report provides recommendations that need to be adopted in order to stop the current negative trends from hindering the progress and realization of the SD Agenda. The authors are clear that the world needs a “transformation” and not only incremental changes if it wants to achieve the SDGs by 2030. They have identified six entry points that “offer the most promise for achieving the desired rebalancing at the scale and speed needed for the 2030 Agenda”. These six entry points are:

All these six entry points are not entry points into individual or even clusters of SDGs, but rather into the underlying systems. Yet, addressing only these entry points may not be enough and the interlinkages that are intrinsic to the entry points should also be addressed.

The scientists have also identified four levers can be deployed to bring about the necessary transformations through each entry point:

Even though each lever can contribute to systemic change, “only through their context-dependent combinations will it be possible to achieve the transformations necessary for balancing across the dimensions of sustainable development and achieving the 2030 Agenda”.

Despite some achieved progress in the realization of Sustainable Development Agenda, the world is still faced with difficult challenges and threats. It seems that the progress is characterized by only incremental changes and a profound and fundamental transformation has not taken place. Yet, the report points out that the status quo must change, in order to eschew further loss in “social cohesion and sustainable economic growth,” curb biodiversity losses, and save a “world close to tipping points with the global climate system.” Although transformation is a challenging process that can be marked with the tensions and trade-offs inherent in widespread structural change, there is no other way to realize the Sustainable Development Agenda by 2030.

Photo by Sebastian Pichler on Unsplash