Is greening of the shipping industry on its way? 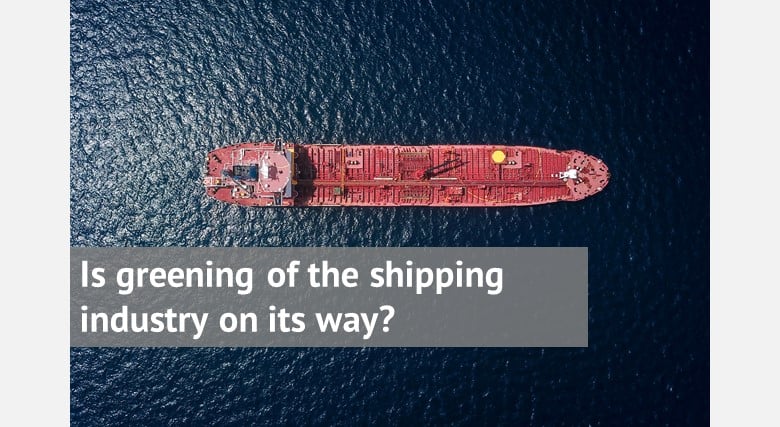 International shipping transports more than 80% of global trade to people and communities all over the world. When compared with other transport modes, shipping is relatively safe and clean, but it has a significant impact on the environment. The detrimental effects of the shipping industry on the environment are mostly observed in damage caused to marine flora and fauna and the industry’s significant contribution to air pollution ( However, even though since the mid- 2000s the shipping industry has been required to meet standards on air pollution, many shipping companies have remained undecided on how to implement them and consequently have not made much progress on reduction of their environmental impacts. Yet, new stricter regulations aimed to make the shipping industry sustainable are on the way and non-compliance will not be an option.

The role of IMO in the creation of sustainable shipping

The International Maritime Organization (IMO) is a specialized agency of the United Nations and its main role is to create a regulatory framework for the shipping industry that is fair and effective, universally adopted and implemented. IMO’s regulations cover all aspects of international shipping such as ship design, construction, equipment, manning, operation and disposal. Out of more than 50 international conventions and agreements for which IMO is responsible for, the following three are the key ones:

The amendments to the MARPOL convention (the main international convention covering prevention of pollution of the marine environment by ships from operational or accidental causes) that have recently been made pose a great challenge for the shipping industry. Namely, as of 2005, ship operators have had to control the level of sulphur oxides (SOx) their fleets produce under Annex VI of the MARPOL Convention. In 2008 the IMO strengthened its global emissions limits and introduced Sulphur Emissions Control Areas (ECAS), where even more robust requirements applied, and the global limit was set at 3.5% m/m. However, from 1 January 2020, MARPOL Annex VI will require all new and existing ships to comply with the new global 0.50% sulphur limit using the most appropriate method for that ship. This regulation will be enforced by fines levied by the IMO’s member states. Also, since January 1st 2019, ships of 5,000 gross tonnage and above need to start collecting data on their fuel-oil consumption under the mandatory data collection reporting entered into force in March 2018. Imposing data collection is one of the measures taken to support the implementation of IMO’s Initial IMO Strategy on Reduction of GHG Emissions from Ships, aiming to reduce the total annual GHG emissions of the shipping industry by at least 50% by 2050 compared to 2008.

Are the shipping companies ready to go green?

Shipping companies will be required to comply with new environmental regulations and policy measures that will be enforced globally from January 2020. Yet, given the current state of affairs, many of them are not ready to meet strict regulations posed by IMO. Especially for sulphur oxides (SOx) cap, the options available to the shipping companies to meet these regulations by the end of the year prove to be costly. Switching from using traditional bunker (fossil) fuels (High-Sulphur Fuel Oils, HSFO), to using low sulphur fuel costs around €250 more per tonne. Another solution for the companies is to install Exhaust Gas Cleaning Systems, known as “Scrubbers”, but installing them can cost between $5-$10 million, take more than six weeks to install and are only made by a limited number of manufacturers around the world. Even the most convenient solution, switching to liquified natural gas (LNG) fuels will cause the industry a few issues. Namely, LNG tanks take up considerable physical space, and thus the amount of shipping containers that can be carried will be reduced. Moreover, due to the likely drastic increase in demand for LNG fuels, it has been reported that the price of LNG may increase as much as 50%.

When it comes to business readiness for a low-carbon economy transition, according to an alarming report from CDP, A Sea Change, which ranks 18 of the largest publicly listed shipping companies, most of them lack the ambition to deploy critical technologies that are needed to reduce their carbon footprints. Low-carbon fuels, including biofuels, hydrogen and ammonia, could cut emissions significantly, but only two companies (Norden and Maersk) are supporting their development at the moment. In addition, retrofitting existing fleets could be a capital efficient strategy over the short term before more transformative technologies become viable but only 14 companies show evidence of retrofitting activity. Yet, according to the report, one of the industry’s key issues is that transparency on its climate change efforts is very low ‘‘only four companies are official supporters of the TCFD and only five companies in the universe completed CDP’s 2018 Climate Change questionnaire’’. Only two companies are targeting net zero emissions by 2050, another two have set Science-based targets and two others have set to align their targets with the 2018 IMO GHG strategy. Board level oversight of climate issues is also very low compared to other sectors.

Well, even though most of the responsibility to meet new regulations lies in the hands of the shipping companies, there are other stakeholders whose involvement will detriment the pace of the low-carbon economy transition in the shipping industry. One of them is the banking sector. Major banks, including Citi, Societe Generale, DNB, ABN Amro, Amsterdam Trade Bank, Credit Agricole CIB, Danish Ship Finance, Danske Bank, DVB, ING and Nordea, represent around 20% of global shipping finance and will for the first time integrate climate considerations into their lending to the sector and disclose the alignment of their shipping portfolios with the IMO’s 2050 emissions reduction target. Also, the oil industry is a key stakeholder since refiners will have to produce a range of new fuels to meet emerging demand.

Thus, refiners, ship owners, banks and traders will all play a key role in delivering the clean energy transition in the shipping industry. Yet, although this seems to be a long and challenging process, there is no way back; sustainable and green shipping is the future.

Share
Tweet
Share
← Prevention of possible AI’s implications on human rights - What has been done? Achieved SDGs progress can be reversed if there is no change in direction, new UN report reveals →
Book an appointment