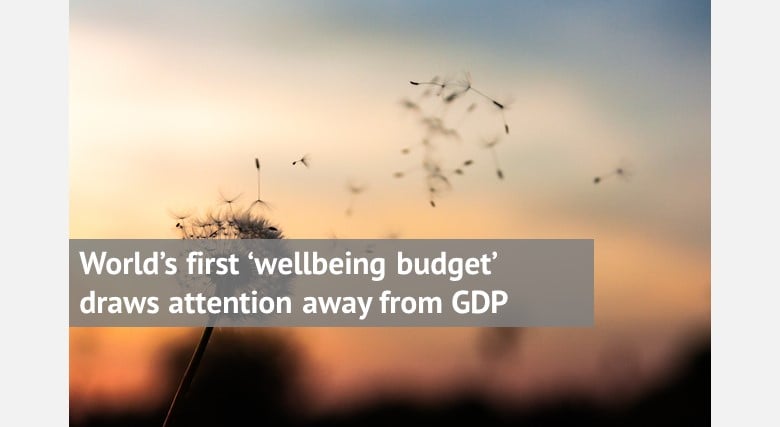 The centre-left government of New Zealand, led by the Prime Minister Jacinda Ardern, revealed its budget on May 30th and it is the world’s first wellbeing budget. This Wellbeing Budget has moved the attention from GDP as a main measure of the country’s wealth and capital to the wellbeing of its citizens. But, what does this divergence from GDP mean? Have the governments been using the wrong metrics to measure the wrong things? Is the government of New Zealand the first one in a row of other countries that will adopt the same principles in budget creation? Will this help the achievement of the Sustainable Development Agenda?

‘‘Gross Domestic Product (GDP) is the total monetary or market value of all the finished goods and services produced within a country’s borders in a specific time period.’’ For more than a half of century, GDP has been used to showcase a country’s economic health. Yet, GDP has been used as a measure of economic activity, not economic or social wellbeing. While measuring only monetary transactions related to the production of goods and services, GDP fails to measure key aspects of quality of life and even encourages activities that are counter to long-term community wellbeing such as the depletion of natural resources. Thus, the “wellbeing budget”, introduced by the government of New Zealand, shifts the attention from productivity and economic growth to wellbeing of community and protection of environment. After collecting evidence and expert advice that pinpointed the areas where the greatest difference to the wellbeing of New Zealanders could be made, the government decided to focus on five priority areas:

Moreover, the process of designing the budget and setting the priorities has differed from the usual one that exclusively focused on GDP as the main measure of national wellbeing and growth. The ministers had to collaborate on funding proposals with their colleagues, and this led to breaking down agency silos.  When it comes to the progress being made toward these goals, it will be measured by 61 indicators that will track everything from loneliness to trust in government institutions.

Even though New Zealand is not the first country to consider the wellbeing approach, it is the first one to create a budget explicitly centred around this concept. Several other countries – including Bhutan, France, the UK and the United Arab Emirates (UAE) – have adopted measurements related to wellbeing such as enshrining Gross National Happiness (GNH) in the constitution (Bhutan) or creating a new cabinet position: minister of state for happiness and wellbeing (UAE), but none of them none have connected the prioritizing of policies as closely to people’s wellbeing as New Zealand has.

The wellbeing budget connection to the Sustainable Development Agenda

Fighting inequality, injustice, ending extreme poverty, hunger and protecting environment are the main goals of the Sustainable Development Agenda adopted in 2015. The rising inequality and the depletion of natural resources have been largely driven by the quest for economic growth measured by monetary value. It seems that focusing only on material wellbeing such as the production of goods, rather than on health, education, and the environment has led to the destruction of our planet and people feeling more discontent. New Zealand’s Coalition government has abandoned the traditional way of designing the budget since realising that addressing complex problems like child poverty, inequality and climate change cannot be achieved through traditional ways of operating. As it is written in the Wellbeing Budget: ‘‘Making the best choices for current and future generations requires looking beyond economic growth on its own and considering social, environmental and economic implications together.’’

By integrating the principles of Sustainable Development in its policies and budget spending, the government of New Zealand has directly contributed to the realization of the Sustainable Development Agenda. As the New Zealand finance minister, Grant Robertson, says: “This budget responds to New Zealanders’ values. Yes, we want to be a prosperous country, of course we do, but we also care about who shares in that prosperity and how it is sustainable.”

The wellbeing budget is definitely a game changer since for the first time it puts social wellbeing indicators ahead of GDP when it comes to spending decisions. Starting from June 2019, the health and prosperity of New Zealand will not be measured solely by economic growth but by the overall wellbeing of its citizens. Although, the centre-right political opposition has dismissed the budget as a marketing charade, the government of New Zealand is resolute and determined to make the budget successful. The wellbeing budget is certainly the best example of how the principles of Sustainable Development should be integrated in the national policy. So, should other countries follow suit? Yes, they definitely should. And the reason why they should do it is given by Mr Robertson: “I think this approach could be applied anywhere. What I haven’t seen anywhere before is the end-to-end nature. It’s no good just having a scorecard of different indicators of success. It’s also using that information to inform your investments – that’s how it becomes a true wellbeing budget.”

Photo by Dawid Zawiła on Unsplash