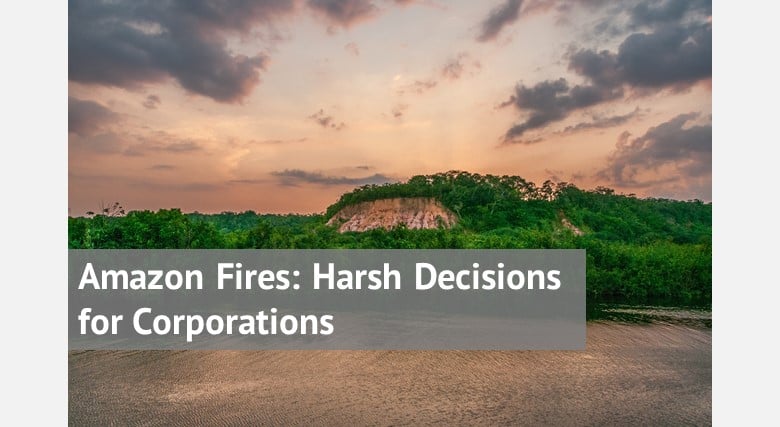 In August 2019, the media headlines shared the news on the unprecedented fires taking place in South America. It is estimated that about 745,000 hectares of the Amazon forest have been destroyed. When the world is on its quest to achieve the Sustainable Development Goals (SDGs), this kind of news trigger disbelief, anger and realization that unfortunately not all of us share the same vision of the future. Evidence suggests, that the Amazon fires were set deliberately, to clear forested land for farming or the grazing of livestock. The first reactions came from the EU political leaders that condemned Brazilian president, Jair Bolsonaro, for his deforestation policies and threatened to block the free trade agreement between the EU and South American nations. But how did corporations react?

Corporations halt the imports from Brazil

Although the first reactions to devastating Amazon fires came from foreign politicians, some corporations followed suit, including leather importers. The first one that announced that it would stop sourcing leather from Brazil, was VF Corporation, the owner of brands such as The North Face, Timberland and Vans. According to VF statement, the corporation would resume buying Brazilian leather when they “have the confidence and assurance that the materials used in our products do not contribute to environmental harm in the country.”

Also, H&M, the world’s second-biggest fashion retailer, stopped purchasing leather from Brazil over the environmental concerns triggered by Amazon wildfires. “The ban will be active until there are credible assurance systems in place to verify that the leather does not contribute to environmental harm in the Amazon,” H&M said in a statement.

Yet, there were not only corporations issuing bans on leather purchased from Brazil, but asset managers and pension funds also issued warnings, terminated deals and stopped purchases of government bonds. Thus, Norway’s biggest investors, Storebrand ASA and the pension fund KLP contacted companies they invest in to make sure they did not contribute to environmental damage after the fires.

The leaders we need

Global warming and deforestation put the large and unbearable pressure on the environment and life on Earth. The SDGs have been designed to put a halt on both processes and ask from governments to adjust their policies so as to make their contribution to global goals. Yet, even without the SDGs, encouraging deforestation by industrial policies that ditch a country’s long-standing commitment to protect environment, the Amazon in this respect, should not be tolerated anyway. Regardless of the push and criticism from the EU political leaders, the very policies of national government indicate that at the end of the day, political will is the key for changing the course that would lead to the sustainable future, and in this case Brazilian government, did not rise to the challenge. Only by adopting and implementing strong, robust and effective policies at national and international level the SDGs can be achieved and environmental disasters can be prevented. It is encouraging to see the reactions that came from corporate leaders and investors that prove that sustainability and corporate responsibility play an important role in corporate decision making; but will one-off statements be followed by long term actions?

Photo by Lucas Campoi on Unsplash