The IPCC’ Special Report on Climate Change and Land: Your Questions Answered 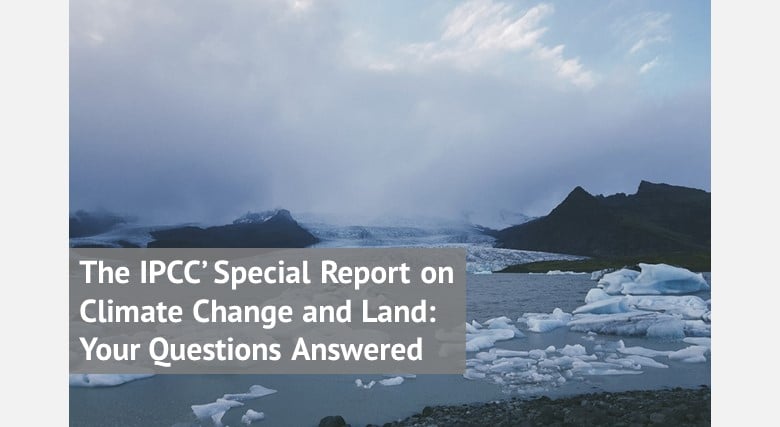 The Intergovernmental Panel on Climate Change (IPCC) is the United Nations body for assessing the science related to climate change. Its recent climate change and land report, is the response to the 2016 Panel decision to prepare three Special Reports during the Sixth Assessment cycle. This report is the first one with land as a central focus and it addresses ‘‘greenhouse gas (GHG) fluxes in land-based ecosystem, land use and sustainable land management in relation to climate change adaptation and mitigation, desertification, land degradation and food security’’. Once the summary for policymakers was released, the IPCC also released the full technical 1,4000 page report, plus supplementary materials.

Q: What is the composition of the technical report?

A: The report consists of seven chapters with each chapter providing an in-depth analysis of one of the aspects of the climate change and land inter-relation. Chapters are: Framing and Context, Land-Climate Interactions, Desertification, Land Degradation, Food Security, Interlinkages between desertification, land degradation, food security and GHG fluxes: Synergies, trade-offs and Integrated Response Options, Risk management and decision making in relation to sustainable development. It also includes two chapters with Supplementary Material.

Q: What does the report say about land-climate interactions?

A: Land and climate affect each other, and the report addresses their interactions. The report notes that climate change can affect the land through both gradual changes in temperature and rainfall patterns, as well as changes in the “distribution and intensity of extreme events”. Yet, the report pinpoints three processes in which climate change exerts a direct pressure on land causing its degradation: “coastal erosion as affected by sea level rise and increased storm frequency/intensity, permafrost thawing responding to warming, and increased burning (of wildfires) responding to warming and altered precipitation regimes”. Still, the land also contributes to climate change. Namely, the land plays a key role in storing greenhouse gases and according to the report, the land absorbed 30% of the world’s greenhouse gas emissions from 2008-2017. But it can also be a greenhouse gases (GHGs) emitter. The report confirms that the leading cause of GHG release from the land comes from human activity and that the major driver of CO2 release is deforestation and other types of vegetation loss, while the major driver of methane and nitrous oxide emissions is agriculture.

A:  The report focuses on the effects climate change has on food security and confirms that “changes in extreme weather and climate have negative impacts on food security through regional reductions of crop yields”. The report says that on average over recent decades, around 10% of cereal production has been lost globally because of extreme weather events. In the chapter five, the report says: “Observed climate change is already affecting food security through increasing temperatures, changing precipitation patterns, and greater frequency of some extreme events. Increasing temperatures are affecting agricultural productivity in higher latitudes, raising yields of some crops (maize, cotton, wheat, sugar beets), while yields of others (maize, wheat, barley) are declining in lower-latitude regions.” The report also warns that the impact of climate change on food yields is expected to worsen in coming decades.

Q: What are the possible solutions?

A: Chapter six of the report assesses response options that could be used to address the land challenges (climate change mitigation, adaptation, desertification, land degradation, and food security). These response options fall into three broad categories (land management, value chain, and risk management). Yet, the applicability of these solutions is region and context specific and ‘’while many value chain and risk management options are potentially broadly applicable, many land management options are applicable on less than 50% of the ice-free land surface’’. The report takes into consideration 40 specific responses to these issues. Eight of these options yielded medium to large benefits for all of the land challenges being considered (increased food productivity, improved forest management, reduced deforestation, increased soil organic carbon content, enhanced mineral weathering, dietary changes, reduced post-harvest losses and reduced food waste); Sixteen response options have large adaptation potential (>25 million people benefit), without 4 adverse side-effects on other land challenges. Moreover, the report emphasises that these response options are linked and that the feasibility of response options is limited due to economic, technological, institutional, socio-cultural, environmental and geophysical barriers. The report calls for coordinated action across a range of actors, including business, consumers, land managers, indigenous and local communities and policymakers to create enabling conditions for the adoption of response options.

The objective of the IPCC is to provide governments at all levels with scientific information that they can use to develop climate policies. IPCC reports are also a key input into international climate change negotiations. In this recent report, IPCC clearly states that actions can and need to be taken in the near-term, to address desertification, land degradation and food security while supporting longer-term responses that enable adaptation and mitigation to climate change. These include actions to build individual and institutional capacity, accelerate knowledge transfer, enhance technology transfer and deployment, enable financial mechanisms, implement early warning systems, undertake risk management and address gaps in implementation and upscaling.

Photo by Lucas Marcomini on Unsplash