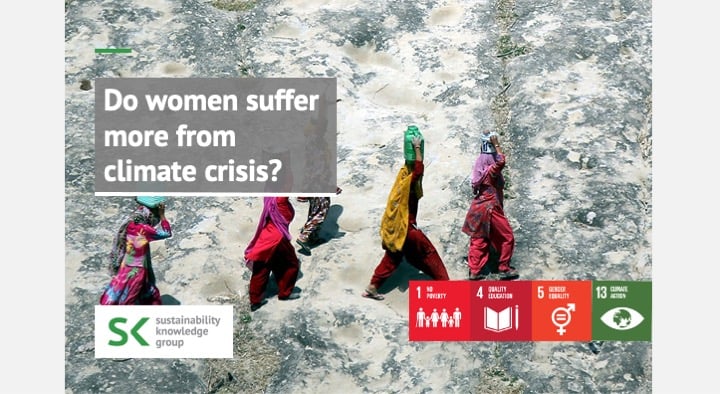 Dealing with current and future changes in the global climate is one of the most difficult challenges facing humanity in the twenty-first century. Although the climate crisis is a worldwide concern, its impacts will not be felt equally across the planet. The impacts of change are expected to differ in size and rate among continents, countries, and regions. It will also have varying effects on people and groups. Certain groups of individuals, such as women, the elderly, children, and low-income populations, are more vulnerable to climate crisis effects. In the face of climatic unpredictability and change, these communities urgently require adaptation methods.

Women and men working in weather-dependent industries, such as agriculture and tourism, are likely to be the worst hit. The Climate crisis, in addition, is not gender-neutral. Women are increasingly considered to be more vulnerable to the effects of climate change than men because they make up the majority of the poor, rely more on natural resources and household management, lack access to opportunities for improving and diversifying their livelihoods, and have low participation in decision-making.

Women made up more than 70% of those killed in the 2004 Asian tsunami. Similarly, Hurricane Katrina, which devastated New Orleans in 2005, primarily impacted impoverished African Americans, particularly women. The 2017 Somalia drought killed 110 people in 48 hours; the majority were women and children due to waterborne diseases. Nomadic indigenous groups are particularly at risk in Central Africa, where up to 90% of Lake Chad has disappeared. As the lake’s shoreline recedes, women must walk much further to collect water.

Due to their gender, societal disadvantages and inherent inequality, women’s lives are shaped differently than men’s, rendering them more vulnerable and incapable of escaping poverty. They are also more dependent on natural resources for their living and survival than men, especially in rural areas where they are in charge of collecting water for cooking and cleaning, using the land for livestock, foraging for food in rivers and reefs, and collecting firewood.

Women have lower earnings than men and are more likely to be economically dependent. When drought or unusual heavy rain threatens agricultural production, for example, men can use their independent savings to invest in alternative income sources or simply adapt. On the other hand, women tend to work longer hours to ensure household livelihoods, leaving less time for women to access training and education, perpetuating the cycle of inequity.

Women are more vulnerable to climate crisis impacts than men since they have less access to climate knowledge, early warning systems, and agricultural extension services. During Cyclone Sidr in 2007, female-headed families in Bangladesh and women whose husbands were gone fishing did not get warnings on time as these were given in a marketplace far from their houses. A 2017 UN report acknowledges that there can be no genuine sustainable human development without gender equality and found that women make up 80% of those displaced by climate emergencies. According to the report, women also do not have enough access to funding to compensate for weather-related losses or adaptation technology.

In some countries, some widely spread socio-cultural norms deny women the same benefits and opportunities offered to men. For example, women have uneven access to land, water, and other resources, as well as frequently excluded from decisions about natural resource planning and management. Globally, less than 15 percent of all landholders are women. This can lead to a neglect of the enormous contributions women can make.

In some areas, socio-cultural standards may as well prevent women from receiving sufficient knowledge and skills needed to escape or avoid danger. It could be because a woman is hesitant to evacuate or seek appropriate shelter. Some women stay at home because they believe shelters will not support their cultural or religious beliefs. The inability to swim adds another possible explanation for the inequality. Women are hampered in some cultures by a lack of equal access to swimming lessons. In some cases, even if they survived a disaster, women and girls are more vulnerable to post-disaster violence and exploitation than men.

It is critical to remember that not only are women vulnerable to the climate crisis, but they are also effective change agents in terms of both mitigation and adaptation. Women have a lot of knowledge and expertise to offer regarding climate crisis adaptation as well as management of disasters if only decision-makers incorporated their views in the initial research, design, and development of strategies for climate change mitigation and adaptation programs. Therefore, involving women in all stages of environmental security planning and decision-making allows for more effective and long-term responses to global challenges. Women’s empowerment and gender equality are important goals, and they’re also critical components of dealing with the climate crisis and building a sustainable future.