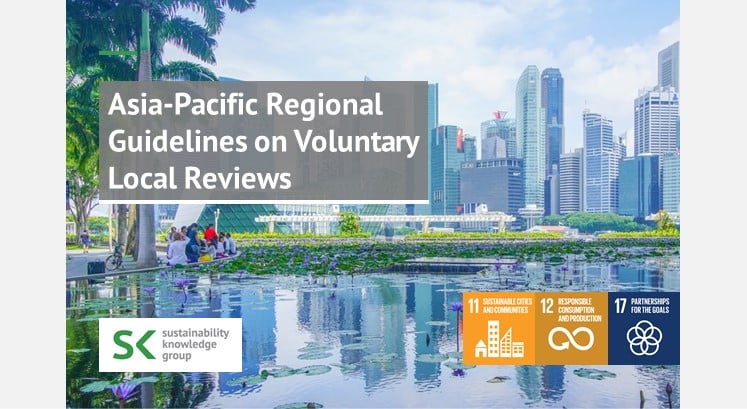 Since 2015, when United Nations member states adopted the 2030 Agenda for Sustainable Development, cities and regions have been working closely to implement it. Governments are increasingly involved in localizing the 2030 Agenda, and “conduct regular and inclusive reviews of progress at the national and subnational levels, which are country-led and country-driven” in the form of Voluntary Local Reviews (VLRs).

Ahead of World Cities Day 2020, the UN Economic and Social Commission for Asia and the Pacific (UNESCAP) launched the first region-specific guidelines for preparing Voluntary Local Reviews (VLRs). The “Asia-Pacific Regional Guidelines on Voluntary Local Reviews” guidelines were launched during a virtual UNESCAP discussion session that brought together speakers from various UN entities, research organizations, and representatives from Asian and Pacific cities and other stakeholders. The session aimed to increase awareness of the guidelines, discuss how the report aligns with other global guidelines on VLRs and generate interest among stakeholders for local and sub-national reviews of Sustainable Development Goals (SDGs) progress.

The report aims to support Asian and Pacific cities willing to conduct a VLR report or produce an initial stakeholder report on how cities work towards achieving the SDGs. The guidelines draw on existing resources and help cities use the SDGs as a common language and localize them through a co-production process with national and local authorities. It allows cities to rethink their planning process and involve local communities in understanding their needs and involve them in recovery strategies and long-term development efforts.

The guidelines are organized according to four chapters as follows:

The chapter provides an overview of the 2030 Agenda and the SDGs and other major global agendas relevant to the urban context. It discusses the need to localize the global goals.

It guides readers through the process of setting up and undertaking the VLR, delving deeper into institutional ownership, stakeholder engagement, and how to link priorities and measure progress.

This chapter focuses on VLR-VNR integration – why it matters and what local and national governments can do to deepen it.

The fourth chapter introduces the building blocks for producing a VLR report and how it is written and prepared and how it can be followed up.

Since there are no officially established SDG targets for local purposes, Subnational Governments (SNGs) often have to “localize” the agenda according to its contexts. “Localization is the process of taking into subnational contexts in the achievement of the 2030 Agenda – from the setting of goals and targets, to determining the means of implementation and using indicators to measure and monitor progress.” SNGs in Asia and the Pacific have made significant progress in raising awareness and aligning local plans with the SDGs.

VLR is a voluntary process guided by the same principles as those of the SDGs:

VLR can bridge the gap between local action and national and global conversation on sustainable development and unleash the constraining force of SNGs in creating innovative pathways to achieve the 2030 Agenda. To accelerate progress in achieving the SDGs, and to maximize the benefits of VLR, forms of local governance should be devised by providing four meaningful opportunities for action:

The COVID-19 pandemic has demonstrated the capacity and potential of transformative cities to solve problems. Through sustainable urbanization, cities can solve persistent problems in the Asia-Pacific region such as the climate crisis, unsustainable use of resources, widespread inequality, discrimination and injustice. “As home to most of the world’s urban population, Asia-Pacific cities can serve as the drivers of sustainable development for the achievement of the SDGs and the Paris Agreement,” said ESCAP’s Environment and Development Division Director Mr. Stefanos Fotiou.

Photo by Stephanie Yeh on Unsplash