Are cities ready for extreme heat? 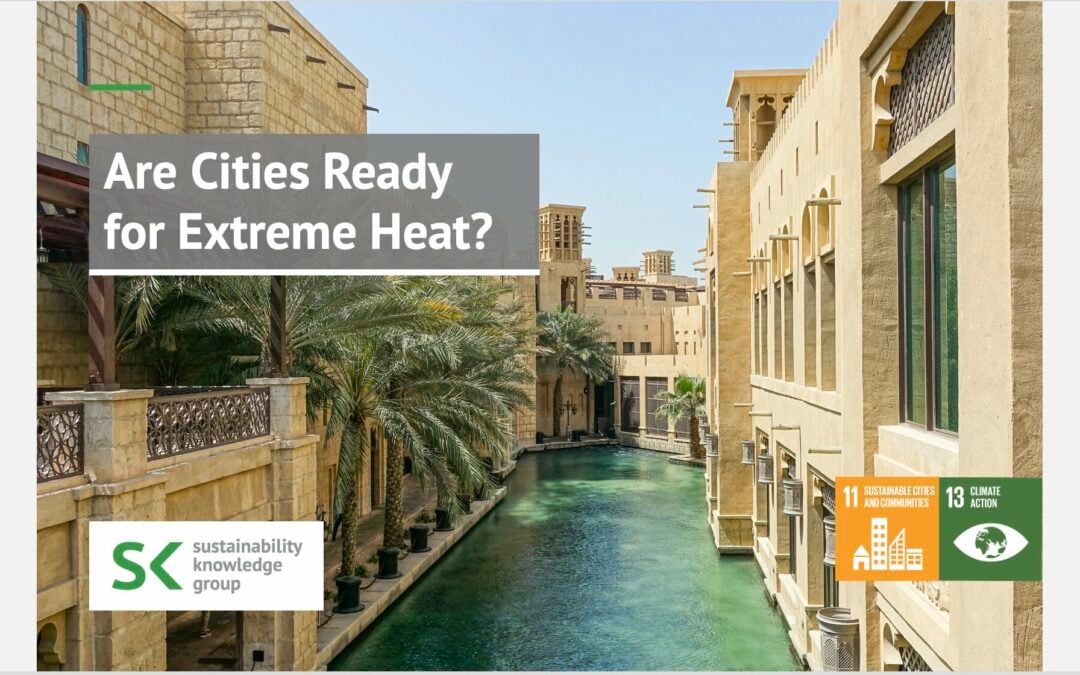 Since the start of summer 2022, several regions of the world have seen record-breaking heat waves, leading to deaths, wildfires, and glacier collapses, all of which are predicted to grow increasingly frequent.

Extreme heat in western Europe is creating deadly wildfires in France and Spain, severe drought in Italy and Portugal, and the UK recorded its highest-ever temperature of slightly over 40°C. In the recent heatwave, which began on July 10, 110,000 hectares of land in Spain have burnt, an area slightly larger than New York City. The year 2022 is expected to be the worst year for wildfires in Spain in a decade. Portugal is experiencing a severe drought, with 45% of the mainland falling under the most severe category, extreme, and the rest in severe drought due to the heat.

For that matter, this isn’t typical for any period of summer when compared to previous averages. It’s an extreme case. Heat waves like these are projected to grow worse, not better, in the coming years. So, while this summer may have been unbearably hot, it may also be one of the coolest in decades.

Other Threats Posed by Extreme Heat

Extreme heat can enhance the likelihood of other types of disasters. Buildings, roads, and infrastructure absorb heat, causing temperatures in urban areas to be 0.5°C to 3.9°C degrees higher than in outlying areas, a phenomenon known as the urban heat island effect. This effect is highest during the day, but the delayed release of heat from infrastructure overnight may keep cities significantly hotter than surrounding areas. Rising temperatures in cities can pose a threat to people, ecosystems, and the economy.

High temperatures can be damaging to agriculture and food production. The outcome is probably “heatflation,” which is when temperatures are extremely high and cause smaller harvests and increase food costs. Heat waves also raise the possibility of heat stress in cattle, especially when nighttime temperatures are high and animals are unable to cool off. Furthermore, the production, transmission, and demand of energy are all impacted by rising temperatures. While greater summertime temperatures raise the need for electricity for cooling, they can also reduce transmission lines’ capacity to transport power, which might result in difficulties with electrical reliability.

Solutions From Cities to Adapt to Extreme Heat

Hundreds of millions of people in cities are urgently attempting to keep cool. Extreme heat is becoming more often and last longer as a result of the climate crisis, but cities without proper planning may make life even hotter. Here are some ways cities are dealing with the heat.

Medellin, Colombia’s second-largest city, has created a web-like network that turned 18 highways and 12 waterways into lush green bike lanes and walkways connecting the city’s parks and other popular destinations. Temperatures in these places and their surroundings have dropped by about 3°C, and officials plan to reduce them by up to 5°C by 2030. The city had planted about 8,000 trees and 350,000 bushes by 2019. It also collects rainfall that comes down from the bridge in an area beneath an elevated Metro line, trapping it in a system of pipes to assist irrigate the green belts.

Temperatures in Abu Dhabi can exceed 50°C. People consider air conditioning to be a need, and they spend a lot of time indoors. People chose to modernize a traditional Arabic architectural cooling technique. Mashrabiya is a term that refers to the latticed screens that distribute sunlight and keep buildings cool without totally blocking light. They are intended to create a breeze and provide shade from the heat. The objective is to prevent direct sunlight from hitting the exterior of a building. The technique has reduced the building’s need for air conditioning by half.

For decades, the globe has been naming hurricanes, cyclones, and typhoons for a reason: a named storm makes you sit up and pay attention. Seville, in southern Spain, is the world’s first city to take this strategy to heat waves. The July heat wave was termed, Zoe. Naming heat waves is beneficial because it shows that we understand how dangerous and harmful they are.

With only 1.1°C of warming, climate change is already creating severe disruption in every part of the planet. Scientists predict that if people continue to burn fossil fuels, heat waves will become more frequent and intense. Cities must prepare for heat waves and educate individuals on how to stay safe in excessive temperatures. Businesses also must adapt their buildings, infrastructure, and working hours to handle higher temperatures. Unless we adapt to our warming climate, our cities will become ever more unbearable and perhaps even inhospitable.