The Role and Performance of Universities According to the SDGs

Universities are powerful engines of global, national and local innovation, economic development, and societal well-being. Universities and knowledge institutions occupy a unique position within society and play an important role in building knowledge-based societies. With nine years remaining to achieve the Sustainable Development Goals (SDGs), there is an urgent need for the education sector to help society transform into sustainable development paths through four main areas: 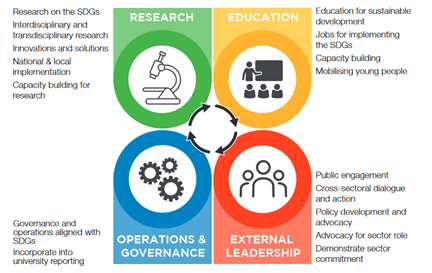 Source: An overview of university contributions to the SDGs

Universities and the SDGs both need each other. The SDGs are a global framework that enjoys strong acceptance and adoption among governments, companies and civil society. The SDGs agenda covers a wide range of interlinked social, economic and environmental challenges, and universities’ unique functions and expertise are essential to overcoming all of these challenges. 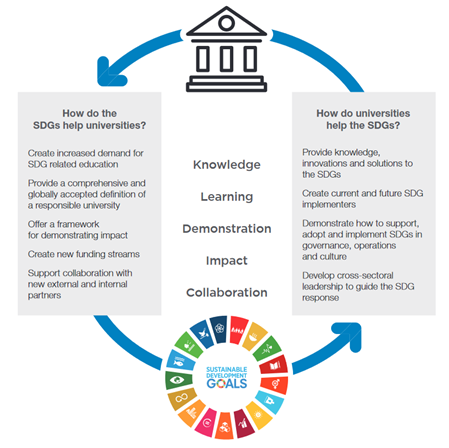 Source: The case for university engagement in the SDGs

In 2021, Times Higher Education (THE) surveyed 2,000 potential international students. The study found that 79% of students believe that universities have an important role in achieving the SDGs, while 9% believe that sustainability is the most important factor in choosing their university.

Since its launch in 2019, the Times Higher Education (THE) Impact Rankings is the only ranking for evaluating the global performance of universities according to the SDGs. The ranking provides a comprehensive and balanced comparison based on all the SDGs across four broad domains: research, supervision, awareness, and education. On a scale from 0 to 100, the highest score is 100, and the lowest score is 0. THE Impact Ratings helps identify best practices for universities and their participation in advancing SDGs and encourage collaboration between universities, industry, and government. Besides, the ranking provides a powerful resource to help students locate where to study.

In April 2021, the third edition of THE Impact Rankings 2021 was issued. The overall ranking includes 1,177 universities from 94 countries/regions, offering a new vision of excellence in higher education.

The top ten in the overall ranking include universities from seven countries and three continents – Australia, Canada, Denmark, Ireland, the United States and New Zealand – and when looking at the top 100 universities in the ranking, 24 countries/regions from six continents appear.

According to THE Impact Rankings 2021, the highest-scoring institution is the University of Manchester in the United Kingdom. UK universities also top three tables on individual SDGs: 11, 12, and 14.

Part of the improvement in the UK is due to their increased representation, with 52 institutions participating in 2021 in the ranking. Besides, Manchester offers £15 million a year in financial support to students from underprivileged backgrounds to support equality and is committed to zero carbon by 2038. In addition, it has already disposed of more than 250,000 avoidable single-use plastics. However, there are concerns that government cuts in research funding could undermine this success.

The ranking described the UK, Australia and Canada as the “Golden Triangle” of countries that performed the best on all goals. Universities in other countries rank first in the specific SDGs: 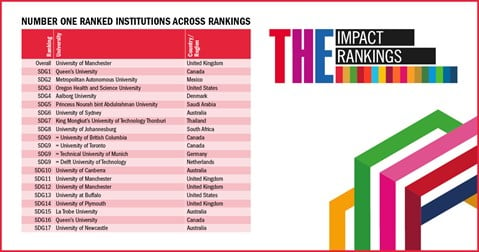 Universities in Portugal and South Korea ranked first in improvement. Portuguese universities have made sustainable development part of their strategic plans and established sustainability offices. They also created the Portuguese Sustainable Campus Network to help university staff share knowledge and best practices, resulting in an improvement in SDGs 3, 16 and 17.

In March 2021, leaders gathered for a first-of-its-kind online forum for university presidents on “The Role of Universities in the 2030 Agenda“. The forum was hosted by Zhejiang University (ZJU) in China, and individual universities highlighted their SDG-related initiatives during the meeting.

ZJU announced a plan that includes making sustainability a part of campus culture, becoming a leader of low-carbon action, and transforming its campus into “resource-saving and environmentally friendly living laboratories”. Yale University in the United States also announced that despite increasing campus space, they had reduced greenhouse gas emissions by 43% over the past fifteen years.

Photo by Edwin Andrade on Unsplash

As a CPD Standards and ILM Recognised Provider, Sustainability Knowledge Group offers certified training courses on Sustainability. To join our trainings and gain the skills and knowledge you need to lead in Sustainability, visit: https://sustainabilityknowledgegroup.com/training