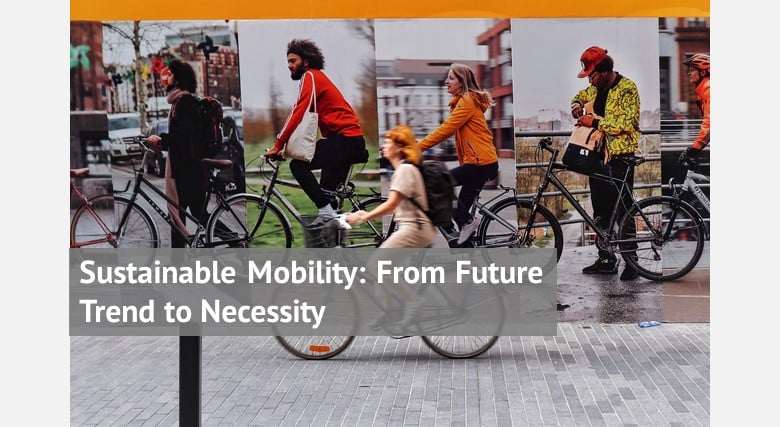 In the era of the Fourth Industrial Revolution, when the extraordinary technology advances are changing almost every aspect of our everyday life, sustainable mobility has recently become a topic largely discussed. Mobility, as a process of having access to various high-quality modes of transport, has started being transformed in a way to become sustainable; autonomous, electric and/or shared are three technological revolutions that represent this transformative wave that impacts mobility nowadays.

Why do we need sustainable mobility?

Rapid urbanization and the spread of private vehicle ownership have caused cities and transport becoming main contributors to climate change. Residents of just 100 cities account for 20% of humanity’s overall carbon footprint and roughly one third of an urban resident’s footprint is determined by that city’s public transport options and building infrastructure. And the alarming fact is that over half of the world (55%) live in urban areas today, and that number is growing: according to the UN, two-thirds of global population will live in cities by 2050. Apart from being one of the main contributors to climate change, transport is one of the biggest causes of pollution in cities.

It could be said that the three most prevalent sustainable models of mobility are electric, automated vehicles and sharing modes of transport. Today, sales of electric cars amount to 2%, but the sales are likely to rise to around 20% and 40% in 2025 and 2030 respectively. Also, the upcoming EU and national regulations and funding should accelerate the process of electrification, while manufacturers have made announcements indicating that their global production in terms of models will perhaps exceed the 2030 targets. When it comes to automated cars, they are rarely used and have been operating for a couple of years only in controlled areas. However, it is still early to talk about the spread use of automated vehicles especially given the fact that many uncertainties remain regarding their regulation, ethics, and public acceptance. Sharing mode of mobility, in terms of shared rides in trains and buses dominated the transport sector until mid-20th century. Yet, owning a car has been a prevalent in the second half of the 20th century and especially in the 21st century. Even though sharing model of mobility provides high utilisation and affordable price, people are reluctant to give up the luxury of enjoying the private space of their cars.

There is no doubt that Europe is making more room for sustainable mobility and is decisive to green the transport sector. The electric bus sales volumes surged in 2019, and while in 2018 the European electric bus market increased of 48% compared to 2017, in the first nine months of 2019 there has already been a + 100% registrations. Also, there are many local initiatives to embrace sustainable mobility as the one undertaken in Pontevedra, a Spanish city, where 300 000 square meters of space in the centre were converted into a pedestrian area. Although, the initiative was faced with some opposition, it brought many benefits such as the reduction of traffic fatalities, and the reduction of CO2 emissions by 70%.

As China’s economy grew from 178 billion USD in 1978 to around 12 trillion USD in 2017, its transport sector also has undergone profound changes. If car ownership is taken into account, the figures are outstanding. Namely, while the entire country of China had under 20,000 registered private cars in 1985, in July 2018 Chinese consumers purchased more than 60,000 cars each day. China as the world second largest economy, has been constantly investing in its transport system and it has constructed the world’s largest High-Speed Rail (HSR) and highway networks, built the world’s largest metro systems and is destined to overtake the United States (US) to become the largest civil aviation market by 2022. With all these developments, China’s transport system was the third largest emitter of CO2 emissions in 2016. However, China is developing “disruptive mobility innovations and has become somewhat of a cauldron of innovation in the development of New Energy Vehicles (NEVs), Intelligent and Connected Vehicles (ICVs), Shared Mobility and digitalized transport innovations”. Moreover, recently, the car-sharing, e-hailing and bike-sharing industries have seen eruptive growth. A major driver of shared mobility in China has been the large amount of funds that have flowed towards the development of the sector and between 2013 and 2017, the Chinese shared mobility market has attracted more than 160 billion RMB (around 21 billion EUR) in investments, with 81.7 % of funds being directed into the ride-hailing market and 11.2% into the bike-sharing segment.

Future or Present of Sustainable Mobility

Electric vehicles, shared mode of transport bike sharing, e-hailing are all part of the wave of sustainable mobility. Sustainable mobility is both our present and our future. And its development will depend on the readiness of people to give up comfortable ride in their “4-wheels toys”.

Photo by Philippe Bertrand on Unsplash

Share
Tweet
Share
← Food Waste: How does it Affect Global Sustainability and how to Reduce it The Other Side of Coronavirus – Social Responsibility (CSR) of Businesses and Organisations →
Book an appointment