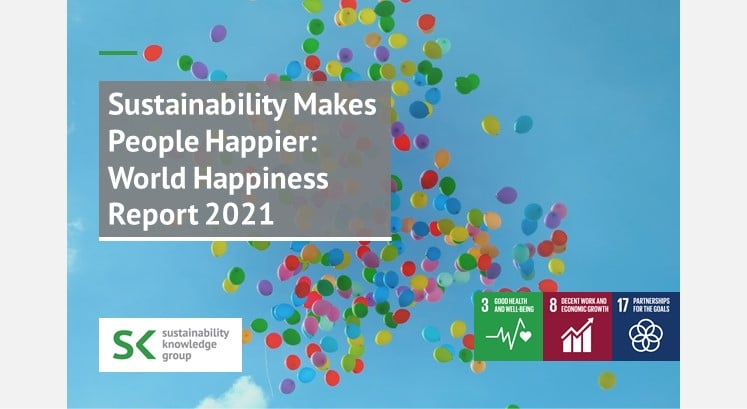 Happiness and well-being is everyone’s ultimate goal. Nations and societies strive to achieve a level of health, psychological well-being and, according to the World Happiness Report, happiness has become a measure of a nation’s progress more important than its gross domestic product (GDP).

Gallup World Poll has been, since 2012, a significant global data source behind the life satisfaction rankings released in the World Happiness Report. The Gallup survey represents about 98% of the world’s population and includes an item on how people rate their quality of life, referred to in the report as Subjective Well-Being (SWB). The Gallup Global Poll has also measures of positive emotions such as “enjoyment, smiling, or laughing,” as well as negative emotions such as “anxiety, sadness, and anger.”

The World Happiness Report 2021 focused on the effects of COVID-19 and how people around the world have coped. According to the 2021 report, Finland is ranked 1st as the happiest country in the world. The ratings overall have remained very similar compared to last year.

According to the report, the ten happiest countries are:

Happiness is closely related to Sustainable Development Goals (SDGs). The SDGs’ mission is to improve the world, create a better world for all people and promote stability, well-being, and happiness, “leaving no one behind”. According to the Report findings, Countries with a higher SDG Index score tend to have better SWB performance. The best model, according to the World Happiness Report, to describe the relationship between SDG and SWB is quadratic and not linear, indicating that a higher SDG Index score correlates more strongly with higher SWB at higher levels of the SDG Index. Countries with a higher SDG Index score tend to do better in terms of SWB. Economic activity is more important for well-being at lowers levels of economic development but as countries become richer the well-being of their citizens stagnates unless further economic growth is more sustainable. This illustrates the importance of a holistic approach to economic development when trying to improve individuals’ well-being, as economic growth is an important driver of well-being.

This relationship is explained by economic development, as countries with higher GDP tend to have higher consumption, which is associated with higher living standards. As countries get richer, the well-being of their citizens stagnates unless further economic growth is more sustainable.

All the SDGs are important, but some SDGs may be more related to well-being than others. The relative importance of each helps to prioritize SDGs that are closely related to promoting well-being.

In general, SDG 3 (Good health and well-being), SDG 8 (decent work and economic growth), and SDG 9 (industry, innovation, and infrastructure) have shown a strong correlation with well-being. The following SDG 10 (reduced inequalities), SDG 14 (Life underwater), SDG 15 (life on land), and SDG 17 (partnerships for the goals) are not important for well-being. In contrast, SDG 12 (Responsible consumption and production) and SDG 13 (climate action) are negatively correlated with human well-being.

In SDG 13, the more economically advanced countries tend to have more pollution while also having higher well-being. Countries advance in SDG 13, less carbon dioxide emissions, less productive capacity, and less well-being. Unlike SDG 12, this effect largely disappeared as it turned the negative correlation into an insignificant one when economic development levels were taken into account.

“Well-being is correlated with the long-term outcomes of environmental policies, but there isn’t necessarily a positive correlation with the short-term efforts required by such policies. We find that this is certainly the case for SDG 12 (Responsible Consumption and Production) and this makes it even more challenging for policy-makers to address this particular sustainable development goal.”
Dr De Neve Associate Professor at University of Oxford

Governments need to move away from traditional methods of measuring growth and development and toward well-being and happiness measures. Indeed, some countries adopt this framework. For example, New Zealand has a “‘Well-being Budget” that prioritises spending to raise happiness levels in its society. The Well-being Budget uses a happiness index metric that redefines value. In 2016, the United Arab Emirates launched the National Programme for Happiness and Wellbeing, aiming to make the UAE among the happiest five countries in the world. Bhutan measures the happiness of its people with the (Gross National Happiness) scale. The phrase “gross national happiness” was first coined by the Fourth King of Bhutan in 1972 when he declared that “Gross national happiness is more important than GDP“.

As a CPD Standards and ILM Recognised Provider, Sustainability Knowledge Group offers certified training courses on Sustainability. To join our trainings and gain the skills and knowledge you need to lead in Sustainability, visit: https://sustainabilityknowledgegroup.com/training

Photo by Luca Upper on Unsplash