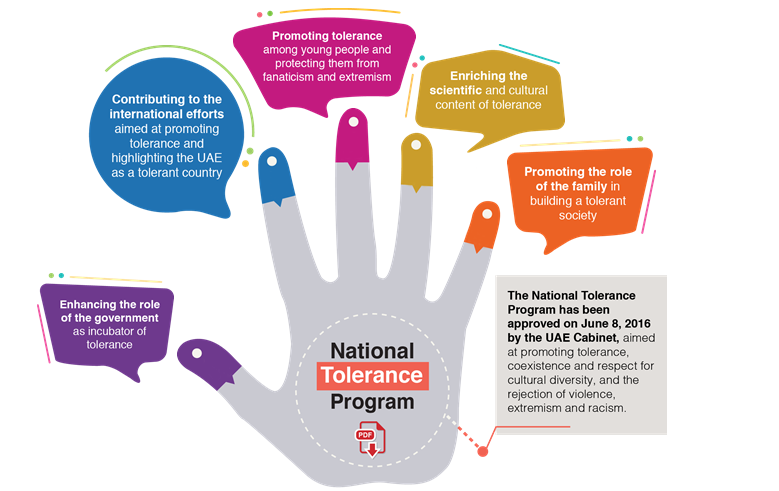 2019 has been declared as the Year of Tolerance by UAE President Sheikh Khalifa bin Zayed Al Nahyan following on from 2018 the Year of Zayed and 2017 the Year of Giving. Tolerance is an endemic value in the Islamic culture, and it is present at individual, organisational and national level. Being a heterogenous society with more than 200 nationalities living in harmony, the UAE represents a good example of an inclusive and tolerant country.

The very act of tolerance

The announcement that 2019 will be the Year of Tolerance followed the statement that Pope Francis will visit the UAE in February 2019 and during his stay he will deliver Mass in a stadium in Abu Dhabi. The clear demonstration of the fact that the UAE is tolerant and welcoming of all religions was the order that came from His Highness Sheikh Mohammad bin Zayed Al Nahyan, Abu Dhabi Crown Prince and Deputy Supreme Commander of the UAE Armed Forces, to rename the Sheikh Mohammad bin Zayed Mosque in Al Mushrif, Abu Dhabi, to ‘Mariam, Umm Eisa’ that is Arabic for ‘Mary, the mother of Jesus’.

Undoubtedly, this initiative made to “consolidate bonds of humanity between followers of different religions”, as stated by H. H. Sheikh Mohammad bin Zayed Al Nahyan in 2017, was a great introduction to the Year of Tolerance.

The five pillars of the Year of Tolerance

The Year of Tolerance will be based on five pillars:

The Year of Tolerance is designed and will be carried out not as an informal, standalone initiative, but as Sheikh Mohammed bin Rashid Al Maktoum, Vice President, Prime Minister and Ruler of Dubai stated:

Not just a one-off initiative

2019 has not been announced as the Year of Tolerance by chance. The post of the Minister of State for Tolerance was first introduced in 2016 by His Highness Sheikh Mohammed bin Rashid Al Maktoum, Prime Minister and Vice-President of the UAE and Ruler of Dubai with the aim to reinforce the UAE’s commitment to eradicate ideological, cultural and religious intolerance and discrimination in the society. Moreover, the Ministry of Tolerance is a part of the UAE Government of the future that is aiming to achieve the Vision 2021 and face the post-oil era.

The forward-looking and progressive UAE government should serve as an example to other governments in the world to take bold and decisive steps and promote the values that would lead the world to better and sustainable future.

If you would like to know more about how to lead in sustainability, utilise proven tools and gain new skills, contact Sustainability Knowledge Group at: [email protected]

Share
Tweet
Share
← Where are we moving on after the COP24? Social Return on Investment (SROI) and its value moving towards sustainable future →
Book an appointment